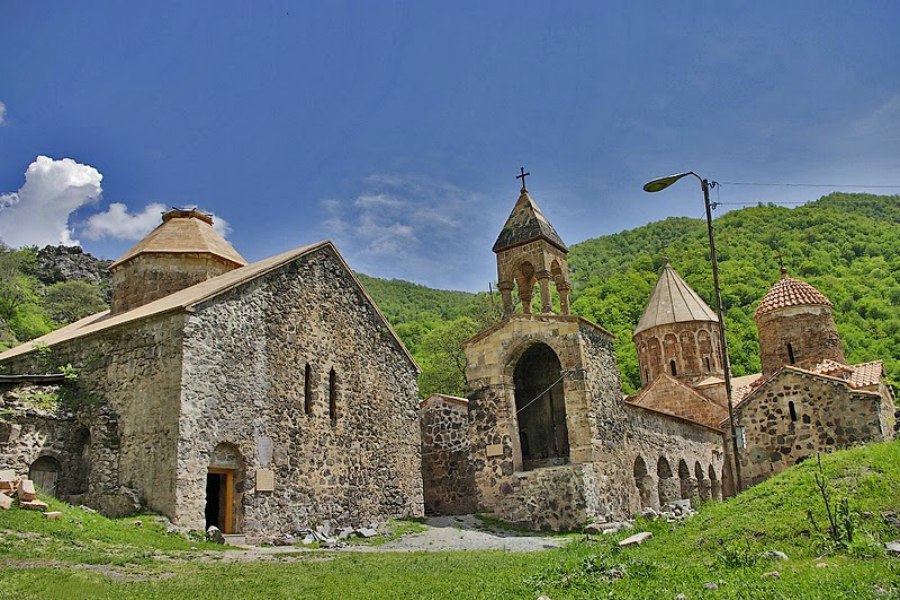 Dadivank also Khutavank (Monastery on the Hill), is the largest monastic complex in Nagorno-Karabakh, and one of the true masterpieces of Armenian medieval architecture. It is located in the northwestern part of Martakert Province of Artsakh Republic, on the territory of Artsakh’s historical province of Upper Khachen.
According to the legend, the monastery was founded at the end of the 1st century and named after St. Dadi who martyred preaching Christianity in the eastern territory of Armenia. The monastery was first mentioned in medieval chronicles in the 9th century. After recent archaeological excavations the remains of  St. Dadi were found and blessed by His Grace Archbishop Barkev Martirossian, the primate of the diocese of Artsakh.
Dadivank Monastery was consecrated again in 1994 and nowadays is on the list of functioning monasteries of Artsakh Diocese of Armenian Apostolic Church. From August 2004, the memorial complex of Dadivank Monastery underwent fundamental architectural restoration. The works of restoration were sponsored by Armenian-American businesswoman Edele Hovnanian. The restoration of Katoghike (the main domed church of the complex) has been completed. The chapel (built in 13th century) of Dadivank Complex was restored by Edik Abrahamian (Tehran, Iran).