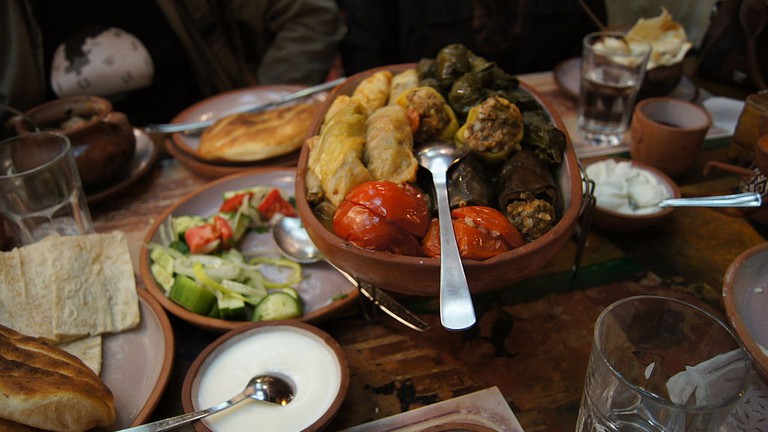 For those who love  culinary adventures, Armenia is just the right place!

Armenian Cuisine is as ancient as its history. It reflects the history and geography where we have lived as well as sharing outside influences from European and Levantine cuisines.

The flavor of the food relies on the quality and freshness of the ingredients rather than on excessive use of spices. Armenian culinary traditions are over 2000 years old.

LAVASH – Armenians like to eat bread with almost everything and the two traditional types of bread in Armenia are lavash and matnakash. Lavach is particular favorite flat bread rolled into circles and prepared in underground ovens; tonirs.

FRUITS AND SWEETS – The most known sweets are gata and nazuk – original multilayered pies with stuffing. Everyone has heard of pakhlava – delicious puff honey cookie with a thick nut stuffing. Fruits such as peaches, apples, pears, cherries, mulberry, figs, strawberries and watermelons are particularly succulent. But Armenia is particularly famous for its apricots and pomegranates, which are considered to be tastier than anywhere else in the world.

WINE AND BRANDY – Armenia is known as the homeland of winemaking. The legend tells that Noah planted the first vineyard in Ararat valley. Burning sun, rich land and the hard work of the peasant have given Armenian wine its unique taste and odor. Ancient wine vessels, sometimes with condensed antic wine are found in many historical places.