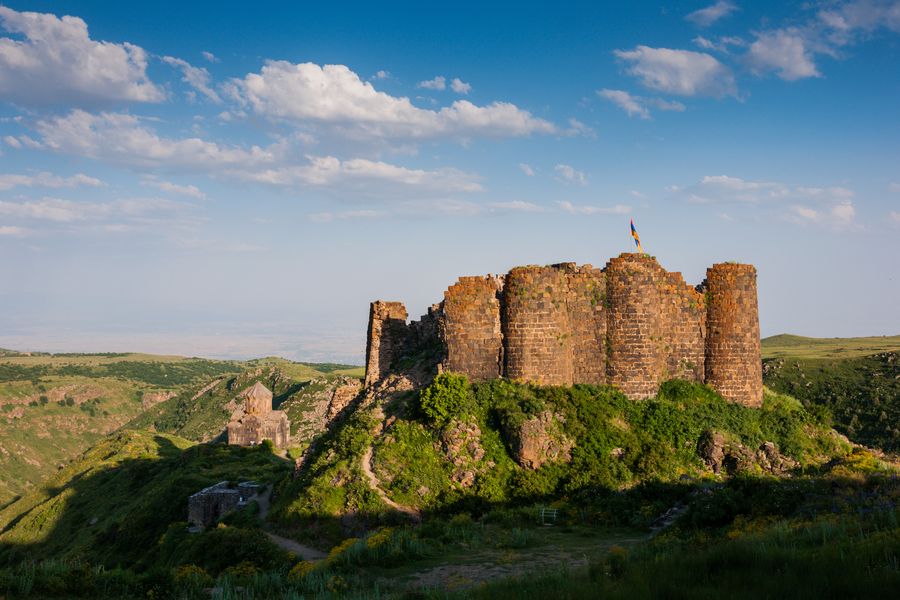 Amberd, the largest standing fortress in Armenia, is located on the southern slopes of Mount Aragats, on a triangular cape where the rivers Arkashen and Amberd join. Amberd means “a fortress in the clouds”; a very suitable name considering its elevation at 2300m above sea level. The mansion and some sections of the walls were constructed in the 7th century by the noble house of Kamsarakan.

In 10th century it was rebuilt by Vahram Pahlavuni who added thick stone walls and three bastions along the ridge of Arkhashyan ravine. During the following period the fortress became the military defense center of Pahlavuni and Bagratuni kingdoms, as well as the summer residence of the rulers.

The complex of Amberd derives its great historical importance from its uniqueness being one of the best examples of Armenian fortress construction. The site incorporates a rich variety of buildings including: a church, a chapel, baths, walls and several gates.

In 1026, Vahram Pahlavuni built St. Astvatsatsin church within the fortress. It is the first church constructed with double entries from all four corners of the cross-wings. Following a turbulent history spanning several centuries and destructions caused by the invasion of the Seljuks, Mongols and Tatars, the fortress finally lost its significance and became a completely desolate construction in 14th c.
Today Amberd is a true destination for history explorers and hikers.