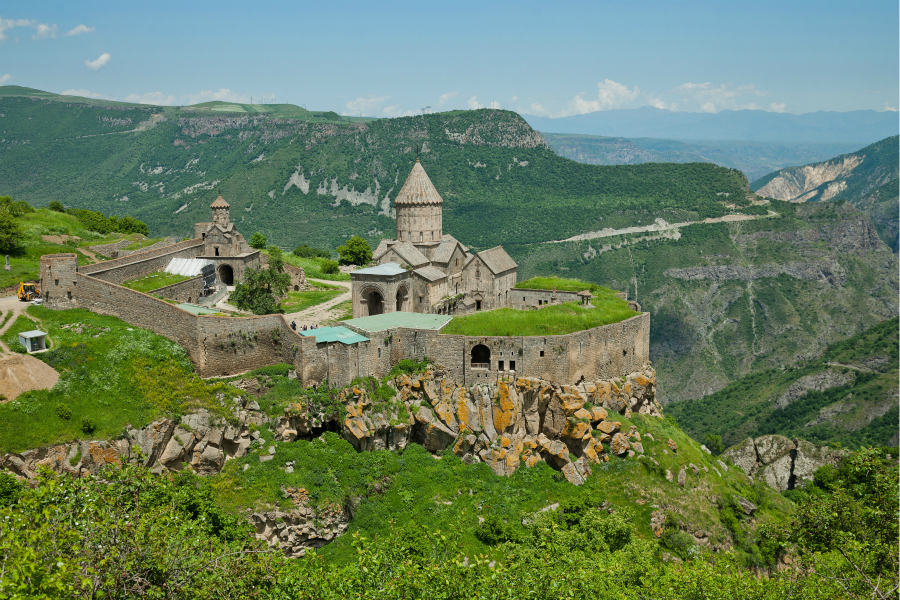 Tatev monastery is situated near the village of Tatev, in Syunik district. The monastery was founded in the ninth century in place of a tabernacle well-known in those times. In the middle ages Tatev used to be the political center of Syunik principality. In the 10th century it had a population of 1000 people and controlled numerous villages. In 13th century it owned 680 villages. The main church of Poghos and Petros (Peter and Paul) was built during the years of 895-906. The outward appearance of the complex is severe and laconic. Its harmonious proportions strengthen the impression of its considerable height. Special attention was paid to the interior decoration of the church which was the main cathedral of Syunik principality. The walls of the church have been decorated with frescoes but now they are almost totally lost. In the main fresco Christ was represented sitting on a throne and surrounded by three prophets and four saints. Church St. Grigory adjoins the main church from the southern side. According to chronicle, the church was built in 1295 in the place of an earlier building of 836-848. The monument “Gavazan”, founded in 904 in the yard is an outstanding work of Armenian architectural and engineering art. This is an octahedral pillar, built of small stones; it is eight meters’ high and is crowned with an ornamented cornice. The square-shaped church of St. Astvatzatzin (Holy Virgin), dates back to 11th century. Tatev ensemble fits in perfectly with the mountainous landscape around it. The large church, dominating the surrounding structures and visible from afar, is the architectural and artistic center of the ensemble. The monastic complex served  not only as a religious centre for the whole region but it was also very famous with its university where contemporary arts and sciences were studied. And the university was not only popular in Armenia but also in abroad as many students from abroad studied here. This university gave many famous Armenian scientists, writers and artists.