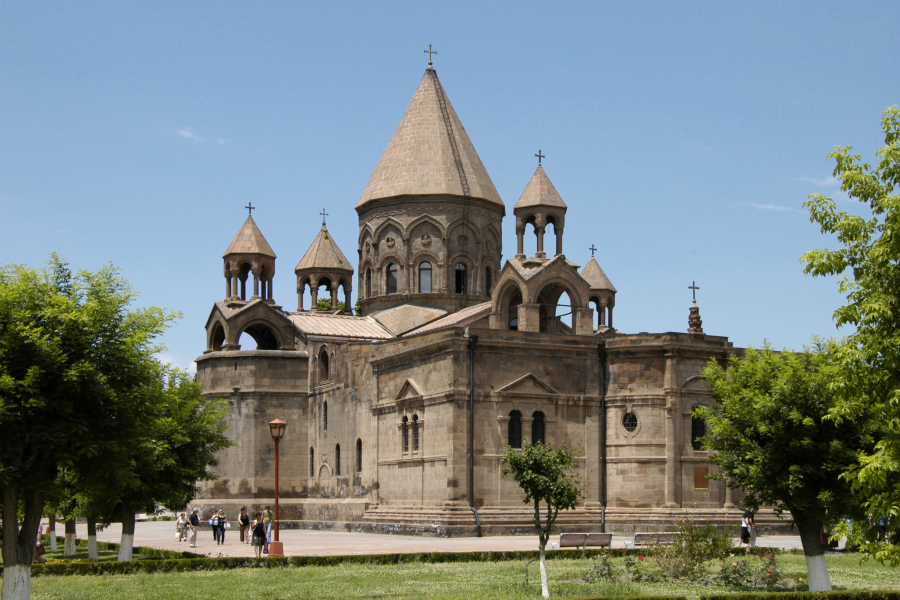 The Mother See of Holy Ejmiatsin is the spiritual and administrative centre of Armenian Apostolic Church worldwide.  The Mother Cathedral built by St. Gregory the Illuminator and King Trdat III has stood as a symbol of  Armenian faith, nation and people. Its construction begun in the 4th century, built on the ruins of a pagan cult site but it has been heavily restored through the centuries, most thoroughly in the 17th century. Displacing a rival mother church at Ashtishat in Western Armenia, Ejmiatsin has been the residence of the Catholicos during 4-5th centuries and again since 1441. As such and as the seat of the miraculous relics of Armenian church, such as the Lance, the hand of St. Gregory the Illuminator, the hand of the Apostle Thaddeus, a finger of St. Jude, a drop of St. Hripsime’s blood, it came to control vast estates and received rich gifts from all over the world. The place where the Cathedral sits is not an occasional one. It is said that Gregory the Illuminator had a vision in his dream that Jesus descended from heaven and pointed to the place where the Cathedral of Ejmiatsin is currently situated. Thus, the name Ejmiatsin means “the coming of the only begotten”. The museum of Ejmiatsin is another prominent part of the complex. It protects numerous cultural values, exclusive art works, candles, curtains, old carpets, religious artifacts as well as illuminated artifacts worth seeing. These national values were brought from different Armenian colonies which proved Armenian national high taste and conception of beauty. Amongst all sacred relics this museum also protects the lance (geghard in Armenian), which is said to have been used to pierce Christ’s body. Ejmiatsin Cathedral together with the other churches in the territory is inscribed in the list of UNESCO World Heritage Sites.