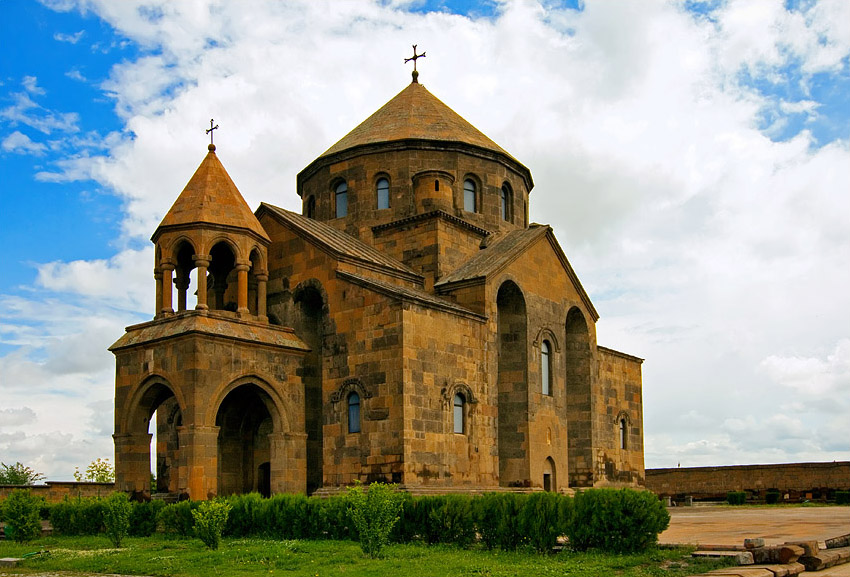 St. Hripsime church, one of the most attractive works of Armenian architecture of the classical period, a variant of the concentrically domed composition stands on a slight elevation at the eastern edge of Vagharshapat City. This kind of composition is characteristic only to the Christian countries of Transcaucasia. Its expressive silhouette, seen from afar, stands up sharply against the background of an emerald green valley dominated by the snowcapped Mt. Ararat. St. Hripsime church, completed in 618, is a vivid example of a structure distinguished by the unity of layout and decoration in which the central-dome system is brought to perfection. The outside niches, which appeared in Hripsime Church for the first time, presently became a characteristic feature of Armenian architecture in the feudal epoch. Later, the church underwent certain changes; particularly the western and southern entrance porticos were pulled down, and the side windows of the altar apse were walled up. The monastery is named after the virgin Hripsime, who came to Armenia with a group of 40 virgins to introduce Christianity. The Armenian king Trtad The Great strongly persecuted the virgins before accepting the religion.