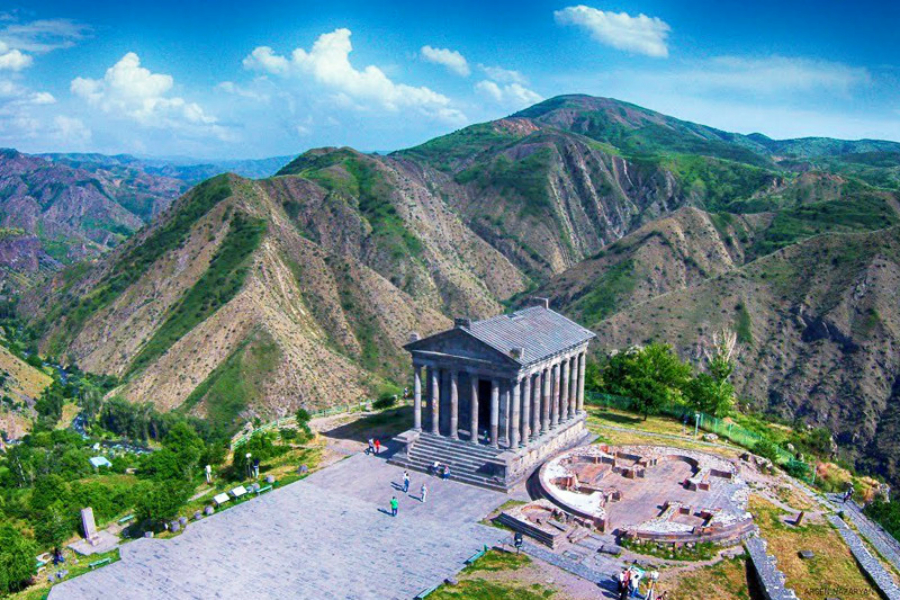 Garni Pagan Temple is situated on a high cliff that extends over Azat river gorge. It used to be a fortress in this area and later the Hellenistic temple was constructed nearly at 70 AD. Garni temple was destroyed by an earthquake in the late seventeenth century but was extensively restored in 1970s as it’s considered to be one of the most iconic sites in Armenia as well as in the entire territory of the former Soviet Union.

The surrounding area of the temple contains a palace complex which comprises a number of buildings over a large area around the main square of the fortress. Palace buildings include the remains of a small temple, throne room, formal hall, residence and a bath house. The site is enclosed by the remains of a fortress wall and gateway which still serves as the main access to the site. Several buildings have been identified; including the remains of a two level Royal Summer Palace, a bath complex, a church built in 897 AD, a cemetery and the most famous and best preserved monument of the site; Greco-Roman temple.

More than six successive layers of human occupation were revealed after numerous archaeological excavations in the site. The earliest traces of human settlement date back to the Neolithic period, followed by bronze age. The fortification circuit consists of massive basalt blocks weighing up to 6 tons and extends over 300 meters in length, punctuated by guard towers and the main entry gate.

Today Garni Temple remains the evidence of long lasted pagan ages of Armenia as it is the only pagan temple in the territory of Armenia that survived after the declaration of Christianity as a state religion.